Finally, the lost city of Atlantis has been discovered—at least in the imagination of Shimizu Corporation, an ambitious Japanese construction company. Instead of searching for fictional Atlantis, the company plans to build a new water world by 2030.

Shimizu’s dream concept, Ocean Spiral, is a self-sustaining, eco-friendly underwater city (fit to accommodate 5,000 people) that spirals and winds down 2.5 miles beneath the ocean’s surface to the seabed, where the complex can harvest all necessary energy from natural resources—like a plant feeding on nutrient-rich soil. ‘Ocean Spiral’ is a self-sustaining underwater city concept designed to accommodate up to 5,000 people.

The underwater community is sheltered inside of a watertight floating dome that’s one-third of a mile in diameter and umbilically attached to a nine-mile long resin helical structure that twists and descends to the ocean floor—creating what’s called an “earth factory.” Powered by generators along the helix and microorganisms, this factory converts carbon dioxide into methane and regulates temperature differences in seawater to produce additional energy (a process called ocean thermal energy conversion). The undersea complex would harvest its own energy from natural resources on the ocean floor.

Like any other city, Ocean Spiral would feature business and residential zones, commercial areas, and hotels to accommodate visiting tourists. Seawater in residential zones would be desalinated using hydraulic pressure, and the dome would submerge farther below water during bad weather conditions.

It’s not literally Atlantis, the mythical lost island described by ancient Greek philosopher Plato as being “beyond the pillars of Hercules,” but in reality, it would take a Herculean effort for Shimizu Corp. to construct Ocean Spiral by its 2030 target date (which includes five years of construction and many more years for advanced technology to become available). The project’s estimated price tag is $25 billion.

The watertight floating dome is one-third of a mile in diameter and features a hotel and lush green landscapes.

If this all sounds too fantastic, consider Egypt’s ancient pyramids at Giza, the Great Wall of China, and the first Moon landing in 1969. They seemed impossible too. It appears technology is finally catching up to Jacques Cousteau’s ingenuity. The French oceanographer (and marine conservationist and developer of the Aqualung), who opened our eyes to ocean wildlife, had a similar vision more than 50 years ago.

In the 1960s, Cousteau’s Continental Shelf Stations (a.k.a. “Conshelfs”) were the first experimental underwater habitats, designed as human research hubs to observe sea life. Conshelf I (constructed in 1962 and submerged in 10 meters of water near Marseilles, France) was the first inhabited underwater colony, sheltering two aquanauts for seven days beneath the surface of the Mediterranean. Cousteau later abandoned underwater habitat exploitation in favor of conservation.

In the residential area, the complex would offer the usual amenities for living, exercise, entertainment and lounging. Water in this zone would be desalinated via hydraulic pressure.

‘Ocean Spiral’ would also feature business and commercial zones.
Momentum for underwater habitat’s eventually slowed as it coincided with humankind’s greater fascination with the Cold War space race. Add in the allure of UFO and alien conspiracies, the film 2001 A Space Odessy, and later, panic over the 1975 film Jaws, water exploration drifted to the background.

According to Tech Times, Ocean Spiral was an inspired response to rising sea levels that threaten land communities worldwide. The concept reimagines the vast deep seas as new real estate territories for accommodating human life. These habitats can be replicated as necessary wherever people choose to live. As they say, location location location.

Ocean Spiral habitats (like these) can be replicated and occupy various oceans and seas like real estate in different cities.

Ocean Spiral isn’t the first undersea project, but perhaps the most ambitious. The Poseidon Undersea Resort in Katafinga Island in Fiji has delayed its opening since 2008 while the Hydropolis in Dubai, United Arab Emirates was already shelved.

Tokyo-based Shimizu Corp. is known for its dream project proposals where imagination supersedes practicality. The company’s other concepts include: a lunar-powered generator called Luna Ring; TRY 2025, a floating botanical city island; TRY 2004, a hovering pyramid city 2,000 meters in the air; and Space Hotel.

Tourists would be able to visit Ocean Spiral just like any other major city.
The company claims Ocean Spiral is more than a dream concept: it’s a blueprint. The concept was developed in partnership with Tokyo University and the Japan Agency for Marine-Earth Science and Technology.

It’s human nature to reach as high, far or deep as possible. All that’s necessary is an overactive imagination and a fearless will to try something impossible—whether it’s one small step for mankind in outer space or one league under the sea. 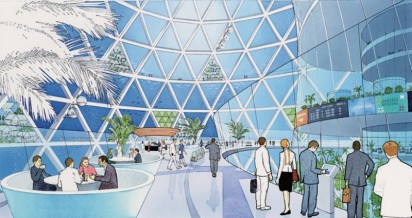 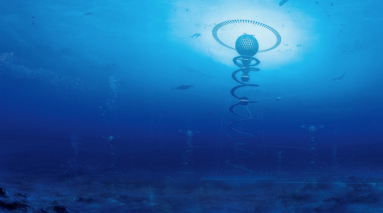 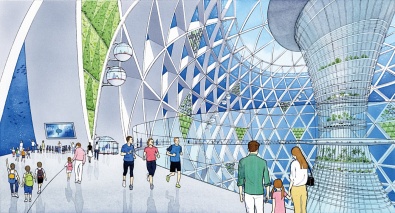 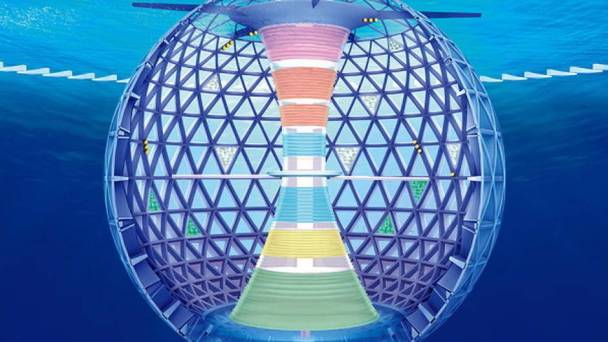