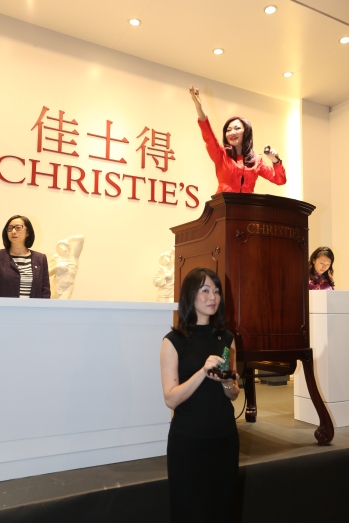 Several historic firsts were achieved and records broken, with today marking the first time a Picasso has been sold at auction in mainland China. Illustrating the increasing prominence of Asian art, a new auction record was set for Singaporean artist Cheong Soo Pieng with his work By The River II achieving RMB4,110,000 (USD$678,326). This also marked a record for Singaporean art sold by an international auction house in mainland China. Masriadi’s Fatman achieved the highest price ever paid for a similar sized work of the artist at RMB 4,590,000 (USD$757,547). This is also the third highest price ever paid at auction for the artist’s work. In aid of his charity, the Quanzhou Contemporary Art Foundation, Cai Guo-Qiang’s work Homeland was sold for RMB 15 million (USD$2,439,024).

More than two thirds of the buyers at the inaugural auction in Shanghai were based in mainland China with the rest coming from elsewhere in Asia, the US and Europe, reflecting the true global nature of the art market.

“It has been a true privilege to be in Shanghai where we have been honoured by the warm welcome. The response to our sale and events has been extraordinary,” said Steven Murphy, Chief Executive Officer, Christie’s. “Bringing international art, including Picasso, to mainland China for the first time is the realization of a long held dream for Christie’s. We are delighted to have welcomed several thousand members of the public and clients over the course of our three day gala of exhibitions, forums and lectures, all of which attracted attention from all over the world. Our mission remains to serve our clients with exceptional works of art and to serve artists and all those passionate about art by convening them with our global network. We hope to continue to share the vibrant creativity we have experienced in Shanghai with a global audience as we grow our operations in mainland China.”

“Our first auction in Shanghai has illustrated how much demand and appreciation there is for art across categories. A red ruby necklace achieved the highest sales figure at RMB 18 million (USD$3,405,285) and records were broken for Singaporean art,” said François Curiel, President of Christie’s Asia. “We saw bidders participate from all over the world with online and telephone bidders joining the nearly 1,000 clients in the room tonight. This is an extraordinary start for Christie’s in mainland China and indicates there will be exciting times ahead for the industry as a whole and art enthusiasts everywhere.”

“Christie’s inaugural auction in Shanghai has been an unforgettable milestone in our 247 year history,” said Jinqing Cai, Managing Director of Christie’s China. “I am incredibly proud of the results we have achieved in Shanghai and honoured by the support we have received. I was particularly moved by the success of Cai Guo-Qiang’s work created yesterday in a memorable and emotional explosion. We look forward to continuing to build on the positive momentum we have felt this week. Artists, art lovers, art institutions and those involved in art commerce all joined in hand in hand to make the event a historic success.”