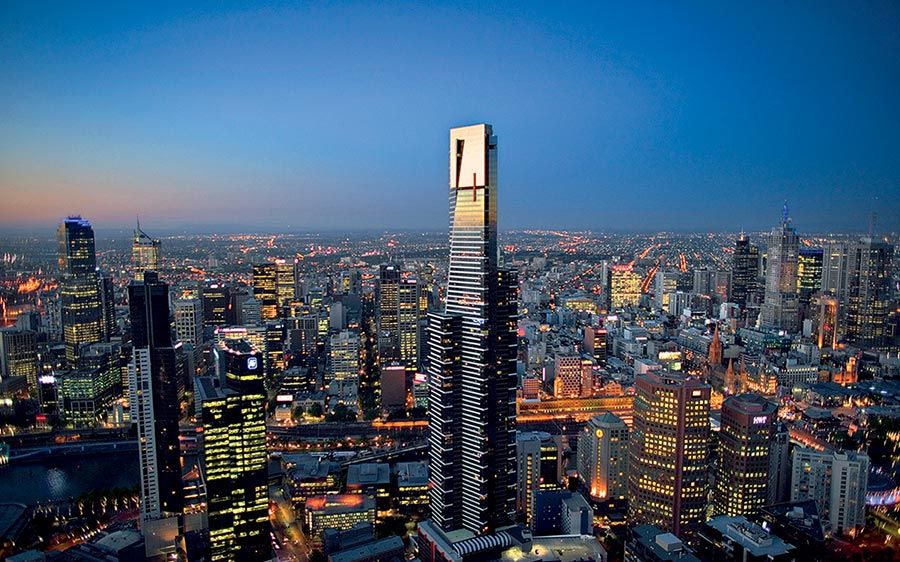 Looking for a home Down Under? The resplendent penthouse atop Melbourne, Australia’s Eureka Tower—which occupies the entire 82nd floor of the gilded address—should be on the top of your short list.

Now on the market for $22 million AUD (around $20.7 million USD), the diamond-shaped luxury pad boasts 360-degree views of the city skyline, ocean, and mountains through floor-to-ceiling windows.

The crown jewel—which touts five bedrooms, five baths, three powder rooms, an executive office, and a home theater—is accessible via a private elevator lobby that houses four lifts in total, and opens to a gleaming white walkway. Equipped with a full smart system that controls the home’s security, climate, and lighting, E82 also comes with five EcoSmart fireplaces; an INOA wine cellar by EuroCave with enough room for 1,300 bottles; a kitchen with a butler’s pantry and Zip HydroTaps, which provides sparkling water on tap; and a second kitchen for the staff.

Originally bought by the Jreissati family as a private dwelling, the penthouse was designed by Fender Katsalidis Architects, alongside interior design architects Molecule Studio and Fitt de Felice. After outfitting the digs with a plethora of luxury details and furnishings—including Italian travertine marble floors and a 20-seat handcrafted dining table—the prominent family put it up for sale immediately after, realizing it no longer suited their needs. That said, the apartment is completely brand new, with no one actually ever having lived in it.

The apartment’s master suite is particularly plush, with direct access not only to the penthouse’s bar, but also to an attached wing that houses a glass-encased Kos spa seemingly floating above the city, situated so far up it’s possible to see helicopters flying below.