Christie’s is pleased to offer style icon Elizabeth Taylor’s first wedding dress, designed by the legendary costume designer Helen Rose, in the sale of Pop Culture on 26 June 2013 (estimate: £30,000 – 50,000). Worn for Taylor’s wedding to Conrad “Nicky” Hilton, Jr. in 1950, the dress symbolises one of the most iconic off-screen moments of ‘Golden Age Hollywood’. At this time, 18 year old Elizabeth was already a veteran actress and celebrated star and was just a year away from her Oscar-nominated performance in Metro-Goldwyn-Mayer’s A Place in the Sun (1951). The Hollywood “wedding of weddings” was the social event of the year. MGM boasted that “more stars than there are in heaven” attended, with the 700 guests representing the A-list of Old Hollywood: Greer Garson, Gene Kelly, Ginger Rogers, Fred Astaire, Esther Williams, and Van Johnson were among the many stars who came to congratulate the bride. Guests also included co-stars Spencer Tracy and Joan Bennett from Father of the Bride (1950), which MGM marketed and skillfully scheduled for release mere weeks after the wedding. The sale of this wedding dress – designed for this celebrated film star, fashion icon and humanitarian – provides a once in a lifetime opportunity for collectors and institutions around the world.

The star of this wedding was the dress. A gift from MGM and designed by their legendary costume designer Helen Rose, Elizabeth Taylor’s first wedding dress was – and still is – so extraordinary that photographs of it have appeared all over the world; from newspapers and tabloids to LIFE magazine. With its twenty five yards of shell-white satin embellished with bugle beads and seed pearls, trailed by a fifteen-yards of satin train, it is exactly the kind of elegant design for which Helen Rose was known. Everything about this gown was custom designed with Elizabeth Taylor’s voluptuous figure in mind; a built-in corset allowed the dress to be tightly cinched in at the waist and the veil’s ten yards of shimmering silk net was carefully considered and attached to a pearl-covered Juliet cap in order to float around Elizabeth. The project was so extensive and was such a priority at MGM that more than fifteen people worked full-time for between two and three months straight on it. 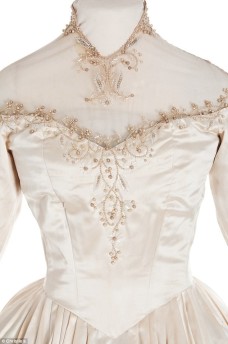 Helen Rose was known for always achieving Louis B. Mayer’s one standing order to “just make them look beautiful” and treated everyone with great respect. She had extremely good relationships with all of her colleagues and clients and often designed their off-screen wardrobes, frequently including their wedding gowns. Perhaps her most famous was Grace Kelly’s when she became the Princess of Monaco, a design that recently inspired the Duchess of Cambridge’s wedding dress designed by Sarah Burton for Alexander McQueen.
Few wedding dresses have as deep a historical connection to both film and fashion as this; it’s an example of a legendary designer and star working together in perfect harmony and the result is something that has made a lasting impact on fashion. Though the Taylor-Hilton marriage would quickly end, Elizabeth’s appreciation of this dress lived on.